From Idle No More:

Idle No More will be peacefully gathering in solidarity at Venice Beach  at noon on Monday, January 21, 2013, in celebration of civil rights hero Martin Luther King. 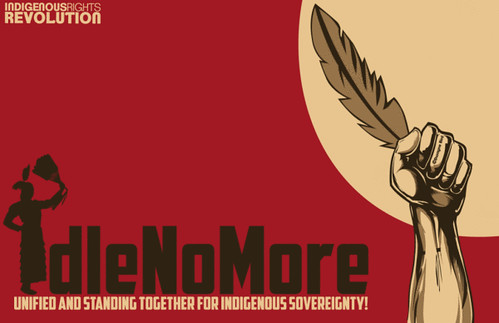 This informal ocean ceremony with drums and round dancing on the sand is open to all. It will take place at Dudley Avenue and Ocean Front Walk on the grassy hill just south of the Rose Avenue Parking Lot which costs about $7 (see directions below). Local activist Daryl Hannah attended our rally in downtown LA at the Canadian Embassy along with Linda Piera-Avila from the Santa Monica City Council.

Idle No More is a movement to peacefully protest attacks on environmental degradations of the lands, democracy, Indigenous sovereignty, human rights, and social justice, and to educate and to revitalize Indigenous peoples through awareness and empowerment. INM will continue to pressure government and industry to protect the environment against projects such as the Tar Sands Pipeline which will run through many parts of the US, to repeal all legislation which violates Treaties and to build allies and relationships with international agencies. As Oren Lyons of the Faithkeeper Turtle Clan and Onondaga Nation Council of Chiefs said, “The Treaties are the last line of defense to protect water and lands from destruction.”

Initially born out of a rally against Bill C-45 started on December 11, 2012 by 4 women, Nina Wilson, Sylvia McAdam, Jessica Gordon & Sheelah McLean. Traditionally indigenous women were considered equals and much more involved in decision making such as Chief Theresa Spence, whose controversial hunger strike also coincides with this date. On January 28, 2013, Canadian MPs return to the House of Commons, which will mark an international day of action by INM and many other grassroot Canadian organizations to challenge federal policies affecting native Canadians which have weakened environmental protection laws without consultation, violated First Nations’ treaty rights, and failed to follow through on commitments made under the United Nations’ Declaration on the Rights of Indigenous Peoples.

The Treaties are agreements that cannot be altered or broken by one side of the two Nations. The spirit and intent of the Treaty agreements meant that First Nations peoples would share the land, but retain their inherent rights to lands and resources. Instead, First Nations have experienced a history of colonization which has resulted in outstanding land claims, lack of resources and unequal funding for services such as education and housing. Some of the poorest First Nations communities (such as Attawapiskat) have mines or other developments on their land but do not get a share of the profit. The taking of resources has left many lands and waters poisoned – the animals and plants are dying in many areas in Canada. Canada has become one of the wealthiest countries in the world through mining, logging, oil and fishing while other countries strive towards sustainability.

Sa’Angna is the name the local Gabrieleno/Kizh tribe of Los Angeles called this area of Venice, meaning “Place in the Sun.” We hope that you can join us for this special event. More information can be found on our website. Click here for the MLK Day event page in Venice and here for our Facebook group which has updates of current events. Whether you are in Alaska trying to stop Arctic drilling and mining or in South America trying to stop oil well contaminates and deforestation of the Amazon, this effects us all, everywhere.

Gray Wolf, Lydia Ponce, Cesear R-P, Barbara Lonsdale, Jose Carlos, Shelly Hanson and Abraham Butler will be hosting the event as local Venice activists. Interestingly enough, city founder Abbot Kinney, was a Native American activist and even a special agent who documented the mistreatment of California Natives. And Dudley Avenue is historically significant as it was one of the locations of the Beatnik Poets of the 50s as Jack Keroauc, Allen Ginsburg and Lawrence Lipton created an anti-materialistic literary movement voicing their dissatisfaction with society and feelings of cultural and emotional displacement of a soul-searching, counter-cultural haven that influenced 60s musicians such as the Beatles and Santa Monica resident Bob Dylan.