Sad to report that “California’s Gold” host Huell Howser died yesterday at his home of natural causes. He was 67. Howser had announced his retirement in November of last year. 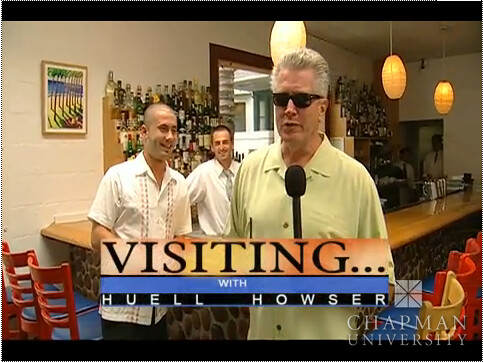 Huell in Venice, 2005. Click the image to watch the video.

A native of Tennessee, Huell began his television career at WSM-TV in Nashville after receiving his B.A. degree from the University of Tennessee, serving on the staff of a United States Senator and a stint in the U.S. Marine Corps.

Howser later joined WCBS-TV in New York City as host of a magazine-style series. He then came to Los Angeles in 1981 to work as a reporter for KCBS-TV. Huell joined public television station KCET/Los Angeles in 1987 to produce “Videolog,” a series of short programs featuring the stories of people from all walks of life. This show became “California’s Gold”, and was the longest running (19 years) and most beloved series about California ever produced.

Of his shows, Howser had said “we operate on the premise that TV isn’t brain surgery. People’s stories are what it’s all about, if you have a good story, it doesn’t have to be overproduced. I want our stories to reveal the wonders of the human spirit and the richness of life in California, including its history, people, culture and natural wonders.”

I had spoken with Huell a few times about being a producer on one of his shows years ago. Unfortunately I had other stuff to do at the time, so I had to pass on it. Huell was the same guy “off camera” as on. Part of what I do here at Yo! Venice! is definitely influenced by what Huell and his crew did. Pretty sure most community bloggers would say the same. Thanks Huell, the world was a better place with you in it. RIP.

KCET’s SoCal Connected will air a special dedication in memory of Huell Howser this evening at 5:30 p.m., repeating at 10:00 p.m.

The following special guests will speak tonight about Howser, who was one of public television’s most iconic figures: