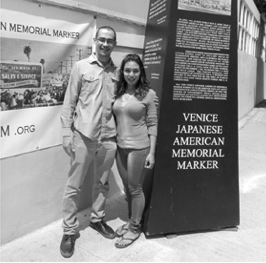 A fundraiser for the The Venice Japanese American Memorial Marker will happen Thursday, April 23rd at Hama Sushi, 213 Windward Ave. in Venice.

The plan, to install a black granite memorial obelisk at the northwest corner of Venice Boulevard and Lincoln Boulevard. It’s a location many in Venice pass everyday. However, in March 1942 it served as a meeting point from where Japanese Americans who lived in the area where taken away to internment camps during World War II.

Arnold Maeda, 88, of the VJAMM Committee and Friends of Manzanar remembers being 15 years old and reporting with his family to Venice and Lincoln from where they were he says he and his family were “…sent to Manzanar Relocation Center, and I spent 40 months behind barbed wires.”

His family lost their home and business.

In 1942 over 100,000 Japanese Americans, more than two thirds of them American Citizens were taken away to camps where they were held in custody under armed guard. In an article written in 1994, Dr. James Hirabayashi, Professor Emeritus and former Dean of Ethnic Studies at San Francisco State says “There were no crimes committed, no trials, and no convictions: the Japanese Americans were political incarcerees”

Phyllis Hayashibara of the VJAMM Committee says that the purpose of the marker, is to “remind people that this happened on the northwest corner of Venice and Lincoln, remind them this happened in the context of World War II — the rounding up of 100,000 persons of Japanese ancestry, including about 1,000 from Venice, Malibu and Santa Monica. To remind them … that it should never happen again to another minority group based solely on their religion, ethnicity, race, or sexual orientation.”

The fundraiser will run from 11 a.m.  all lunch profits will go to VJAMM and ten percent of all sales from dinner (6 to 11 p.m.) will be donated to VJAMM.

For more information on the project, visit www.venicejamm.org.